I write this from my house, exhausted but happy after a day of driving, a day at PAYA and a brief trip to Longwood Gardens (so much story fuel, but I digress), and then another long day of driving and cars that threaten to break down (that = today). So, like any mature college student on the brink of her third year who decided to take an eight-hour-one-way trip in pursuit of books and meeting author people and ALL the writing awesomeness, I've decided to blog about it.

However, unlike real bloggers, I failed to take lots of pictures. This, dear friends, was because I was greatly in awe. On an intellectual level, of course, I know that authors are ordinary people (albeit ordinary people with a deal of storytelling ability), but that doesn't change the fact that I finally had the opportunity to meet people I truly admire.

And it was outstanding. 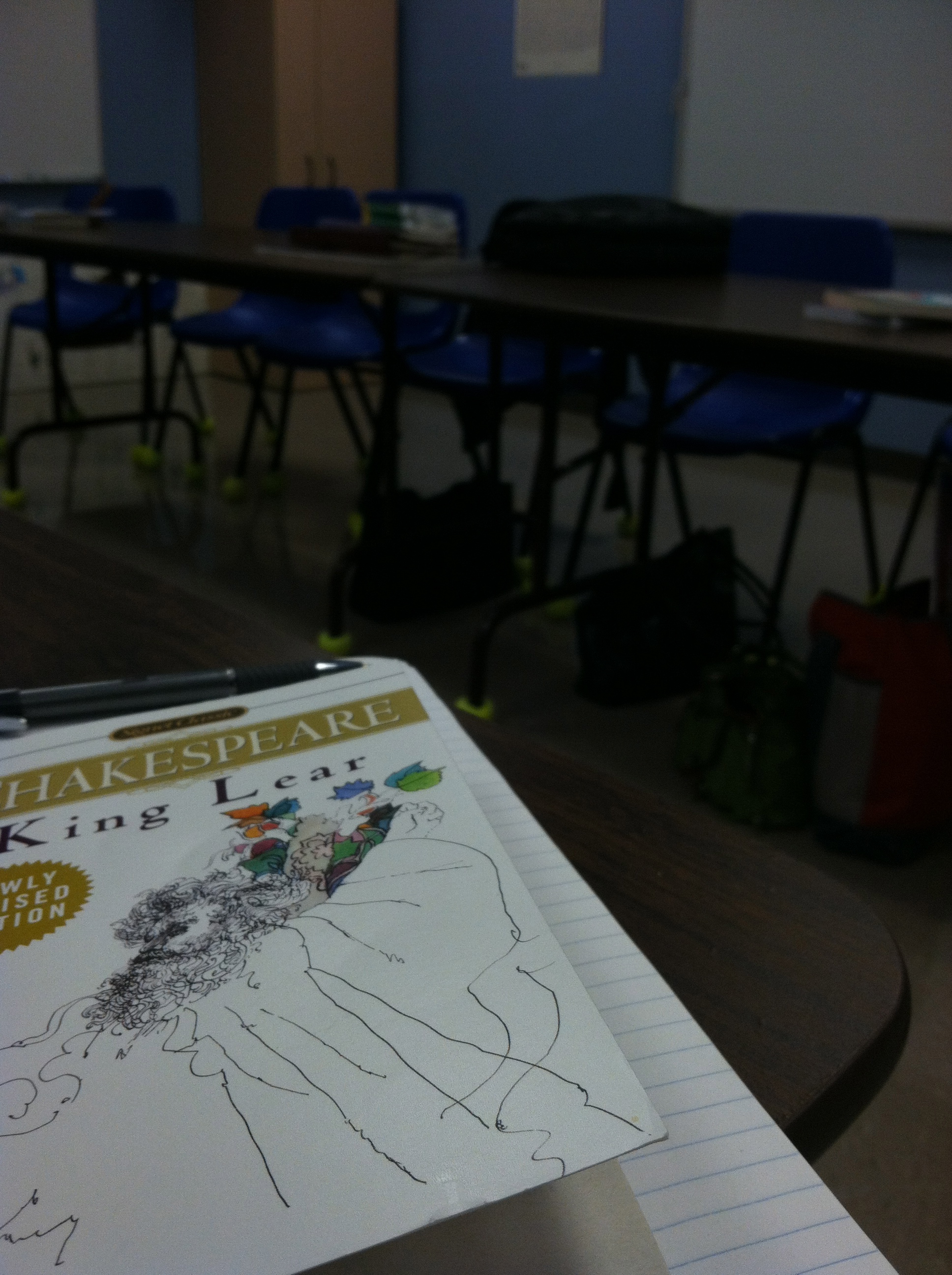 Picture taken shortly before the writing workshop began. Yes, I was reading King Lear.* I AM ALWAYS READING KING LEAR.
The day began in the room you see above for the PAYA writing workshop. It was a workshop of Awesome. The opportunity to hear the authors talk about such different things through their own perspectives was really invaluable, and it also reinforced something that—though I knew it intellectually—I needed to hear.

And that means that I can, y'know, write like myself.

That sounds silly, of course—who else would I write like, after all?—but for me it's a real concern. I've blogged before about my own knee-jerk reaction to being considered derivative or unoriginal, which—when balanced with the endless feeling of OMGISUCKHOWCOULDANYONEEVERREADME—makes for a ConfusedWriter!Rachel. CM helped me in both these respects, because a) I deliberately used archetypes and tropes, or attempted to, and in doing so discovered that it made the story much stronger than it otherwise would've been, and b) I wrote it the way I wanted to write it, using the style I liked (...or an approximation of it, anyway).

I might not totally suck. Not all the way.

So—without going back into my THIS IS WHY I LOVE YOU, CUDDLE MONSTERS rant—CM has been such a lovely thing for me. It's helped my approach to writing in so many ways, and I love it. Even though it needs work. Even though I know it'll be hard. I love it . I actually want to start editing it, because I know that I can make it better, and then it will be Shiny. And maybe—once it's shiny—I can give it to people.

You know. For Real.

And that's a beautiful thought.

*steps off soapbox* Right. Back to PAYA.

I met so many wonderful people at the Workshop of Awesome and the subsequent signings, including the positively amazing Victoria Schwab. I've posted before about how much I admire Victoria's writing and the way it blends clear, economic prose with gorgeously poetic phrasing, so it should surprise no one that her books turn Fangirl!Rachel into a little puddle of mush. Thus, my excitement level was high. I mean, we could TALK without a 140 character limit! THIS IS COOL STUFF, GUYS.

Both in the workshop and out of it, Victoria's insight into the writing craft and the underlying structures of storytelling and such was incredibly valuable, and I really can't thank her enough for spending time and chatting with me at PAYA. (fun fact: we both love the word archetype. If it weren't potentially creepy, I would say our friendship is meant to be right now. But, since it's potentially creepy, I won't. cough)**

While at PAYA, I planned to buy ALL the books. However, because I was Not Expecting This, I took only one bag. The result was that I had to lovingly cradle all the books in one arm. Which hurt. But guys! Books! Signed books! And I could talk with the authors! EPICNESS.

Overall, it was a really wonderful way to end the summer, and I'm so happy that I got to go and finally meet People Who Understand Writerly Feelings. The only bad part is that it had to end (well, that and the part where we discovered that the wheels on our car could've fallen off and killed us on the Interstate, but that wasn't PAYA itself...). Nonetheless, it was very fulfilling, and I'm incredibly glad to have had this opportunity.
*Trivia about which no one cares: Cuddle Monsters in its most bare, raw form had a doppelgangerish predecessor. I called that doppelganger The Edmund Project. Infer from that what you will... *mysterious cackle*

**I'm still kind of thrilled that we got to meet. Hence the fangirlishness. But, as I said on Twitter, I REGRET NOTHING.
Tags: books, cuddle monsters, fangirling, fiction, paya, stories, writing
Subscribe